Free Banks for DX7 And Compatible Synths My expanding resources list for DX7 and compatible synthesizers and plugins This Post is dedicated to my buddy in my FM adventure, John Gilbert , and to my Sweetwater rep, Erik Molenaar , who feeds my gear habit! To my horror I today noticed that a major source of free DX7 info and sound banks has vanished. Lucky for us, I was quickly able to locate a site backup on the archive.org Wayback Machine... It's a sad reminder that anything on the internet can vanish at any time. Thank heaven for the Internet Archive. I'm even posting my own creations to the Archive these days. I also contribute monthly. The Archive relies entirely upon user donations and You can support the Archive too! They even take Paypal. Go to  http://archive.org/donate Bobby Blues Free DX7 Patches - All The Web https://web.archive.org/web/20201108110724/http://bobbyblues.recup.ch/yamaha_dx7/dx7_patches.html There's a lot of info for a few different synths on that ol
1 comment
Read more

Free Audio Converter for Macintosh, Linux and Windows If you make sound recordings using a computer you no doubt have a regular need to convert from one file format to another. Free:Ac is a freeware and open source audio file converter that is current and maintained for all major desktop platforms including for Windows, Linux, Unix, and all modern flavors of Mac OS including for Intel, new M1 systems, and even for PowerPC systems! That's great news for audio and video content producers who still live on G4 and G5 Mac hardware. Free:Ac is also a thorough CD ripper ! You can grab a copy of the latest version at the Free:Ac website freac.org Follow my blog for more of my favorite freeware finds! Soon I'll be posting original sample libraries too, made by me, glenesis !
Post a Comment
Read more 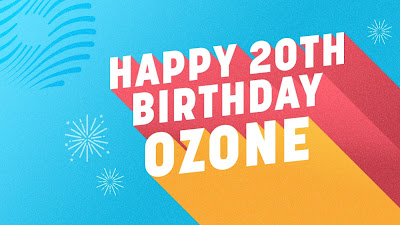 I paid for this ...you don't have to! iZotope Ozone Elements for Free For a Limited Time To celebrate the 20th birthday of iZotope Ozone mastering plugin the manufacturer is giving the limited version Ozone Elements away for free! The imager section alone is worth the download. If you make music on your computer, this is a good piece of software to have. Go to this link and download Ozone Elements for Free. Hurry up. It won't be free for long. https://www.izotope.com/en/shop/ozone-elements.html Follow my blog for more links to QUALITY and essential music production software that's absolutely free!
2 comments
Read more 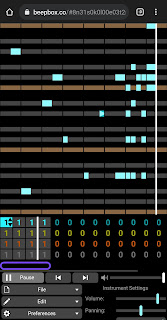 Free Chiptune Sketchpad BeepBox  Easy Online Sequencer! Tonight I stumbled into an online sequencer for making and sharing musical ideas. I am having a lot of fun with it and I need to share it with you! BeebBox.co is a sequencer in a web browser. It lets you enter notes into a grid and assign them sounds and edit your work. What's new to me is the way it saves files. Every change you make alters the unique URL of the composition! To save and share your works of musical genius, simply copy and paste your URL from the address bar! Here's a screenshot of the site... And here's a link to the site... http://BeepBox.co And here are a bunch of tweets featuring links to beepbox compositions... https://twitter.com/search?q=beepbox.co&t=PNFiVYBoH-F4Im9nHuFTPA&s=09 ModBox is a GitHub project that is a fork of BeebBox. ModBox offers more channels and more advanced controls than BeebBox. ModBox is at this URL... https://moddedbeepbox.github.io/3.0/ Both sites have detailed do
1 comment
Read more

October 12, 2021
Pianobook Overhaul 650 Free Sample Libraries These are places and people you computer-music-makers should all know about!!! Spitfire Audio & Pianobook were started by Christian Henson . Here is his youtube channel...There is Valuable Info there by the ton, including lessons on constructing your own sample libraries. https://youtube.com/c/ChristianHensonMusic In case you didn't know that the Pianobook site exists, it is an unfathomably huge repo of sample libraries for free , made by so many amazing people. Pianobook is a community of musicians who create and compose with these sample libraries. Membership is free, and you are welcome to contribute sample libraries and to participate in the forum. Pianobook currently has 650 beautiful, usable sample libraries in many popular formats. This week Pianobook received a complete overhaul of its interface, focusing more now on the people who create the sample libraries. Site navigation just got a big overhaul. Now it's easier
Post a Comment
Read more

October 03, 2021
Coincidental with me starting my blog, David Hilowitz of Decent Sampler fame has made a video of his favorite 5 Free Software Instruments. I won't waste bandwidth, I'll let David tell you about them in his video. I will say that I use all of the plug-in instruments he mentions, and that all of them are epic! Here's David! https://youtu.be/CPjj6KzrW0s
Post a Comment
Read more

October 03, 2021
Plugin Boutique is a great site to buy discount plugins, for sure, and they take Paypal, which is super convenient. I am in no way affiliated with Plugin Boutique nor with any site, but I do shop there monthly. I think a lot of retail prices for software are obscene, but every few weeks even insanely expensive plugins go on sale at Plugin Boutique for ridiculously low prices. Better even than the sales, though, are the tons of freebies available. They do require you to register on their site, but they have a colossal number of free plugins on site. Having an account there is good, too, because they keep all of your licenses and serials in your account pages for your convenience! If you've ever had a computer up and die on you then you know how amazing this feature is. Also, every month, they offer a great piece of usually expensive commercial software as a bonus with any purchase. All in all this is one of my favorite retailers, and I'm glad to share them with you. Of course, i
Post a Comment
Read more

September 29, 2021
Free IR Software This is huge. I try to keep articles short, because the pages I link to generally have so much better info than I can provide. In this case I need to mention Bill Gardener . I first ran into Bill Gardner's name in the early 1990s. I'd found a small Mac program that turned any Digidesign DSP card into a programmable algorithmic reverb unit, which is astounding to this very day. Coincidentally, some long time ago, I fell in love with all the audio plugins made by a company called Wave Arts . After 20+ years of using Wave Arts Plug-Ins I only recently discovered that it's Bill Gardner's company. I thank you, Bill Gardner! Your wares have made my life happier and better-sounding! Bill's app, simply called "Reverb", let me program FX that I'd never heard before not since. It gave me a deeper understanding of algorithmic reverbs construction. Wave Arts recently partnered with a company called Impulse Record  and together they make a convolut
Post a Comment
Read more

September 28, 2021
Hi! Lucky Post #3 here. On to business... Fairlight CMI Resources Index Free Fairlight CMI Samples and More Last week I went hunting for Fairlight samples to feed my sample habit. From its release in 1979, the Fairlight CMI additive synthesizer and sampler immediately revolutionized the sounds heard on hit records. I wanted to find the sample library, but what I found was so much more! Although it is difficult to locate working links, some hunting reveals that there are a few accessible good transfers of the original Fairlight CMI IIx library, as well system disk images, manuals, schematics, lore, and even a detailed, freeware CMI emulator you can run on your computer. While digging around, I found a lot of dead links. Wherever I could, I located backups of missing links at archive.org . It became clear to me that I ought to make an up-to-date index with links I've verified, and that's actually why I started this blog. So now, I present to everyone... Free Fairlight CMI Samp
Post a Comment
Read more

September 25, 2021
Hi folks! I see today that Ghosthack, purveyors of excellent sample libraries, are for a limited time offering their sample library called "Unique Drum Collection" for the discounted price of FREE. The sample kit contains 237mb of royalty-free drum content processed in interesting ways. Hurry up, because ordinarily this kit retails for 39€/$45 THE CATCH is only that they require your email. Ghosthack are a legit, reputable company that sells sounds. I subscribe to their list. You simply give them your email, and they email you a download link for the sample pack. For more info go to the Ghosthack Unique Drum Collection product page, here: https://www.ghosthack.de/free_sample_packs/unique-drum-collection Happy music making, glenesis
Post a Comment
Read more

September 23, 2021
Hello! Friendly Greetings and the FreeSound Repo! Hi, I'm Glenn Moses. I'm a producer, engineer, singer, songwriter, synthesist, sound designer, gear hoarder, and I'm the founder of the 131 Records indie record label in New York. It was one of the first digital-only record labels in labels in existence. I founded it because I got tired of seeing CDs end up in landfills. That's a whole nother rant... I've been in the music business since the 1980's. I grew up making computer music before it was fashionable. MIDI and I have been making music for about the same amount of time. I've worked with comedy, Progressive Rock, Rock and Roll, New Wave, The Blues, and I was at the very forefront of Jam Rock and 90's psychedelic. I've done album design, seen many records from inception to release, and watched the entire distribution process change from a thing for seasoned professionals and pros to a thing kids at home do for fun,and I love it. I was doing it on m
1 comment
Read more

glenesis
Hello. My name is Glenn Moses, a.k.a. glenesis. I am an independent recording artist. I write songs, and then fuse them into sound sculptures using recording technologies with the assistance of a whole lot of software. I primarily record and mix into Mark Of The Unicorn Digital Performer in Apple Macintosh computers. I am a creator of synth-pop. I am the Founder & Sole Proprietor of the 131 Records independent record label. Other artists on my label include Afro Brick, O.T., K.G.B., The Point, More Than Nothing, Tragick Magic, Rob Tebaldi and Chris Oliveri. I also have one of the largest collections of Phish tapes in the known Universe. I despise Facebook, yet I am addicted to tumblr, twitter, and instagram :D